For years I have adored Hamilton with no expectation of ever seeing it live. Between the cost and exclusivity of tickets, it seemed impossible. I’m so grateful Lin Manuel Miranda was considerate enough to include nearly the entire play (minus one song) on the soundtrack because no one is excluded from the story due to financial or logistical circumstances.

It turns out I have the best family members on the planet, and I actually got to experience it. My absolutely generous and incredible godfathers back home were able to score us ORCHESTRA seats at the Providence run. I know I’m not alone in feeling that Hamilton is the best play I’ve ever seen. 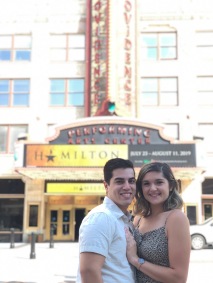 We were 7th-row center! Each nuance, dance move, and facial expression was clear as day. It was surreal. From the first beat, I could barely process that the play was actually happening. Prior to seeing the show, I knew every word, inflection, emphasis giggle, and guffaw from the Original Broadway Cast Recording. I didn’t imagine my auditory experience would be anything new and figured it would just be the visuals (dancing, lighting, acting, etc) that’d have something fresh to offer me. Boy was I wrong.

The visuals certainly were something to behold. Hamilton is performed on a special stage with a round rotating platform in the center, and the way it’s incorporated in the staging and choreography of the major moments (in particular during Helpless and The World Was Wide Enough) was so creative that it actually changed my understanding of the story.

The lighting effects ranged from comical to gut-wrenching. King George stamping his foot to the “You’ll Be Back” lyrics “I’m so blue”, only to have the light switch to blue was a hilarious accompaniment to the song. The desperate, almost epileptic-inducing, flashes of light during Right Hand Man had me right in the war trenches alongside the revolutionaries.

The sound of a strong wind blowing as Hamilton deliverers his final “What is a legacy?” monologue in The World Was Wide Enough that left me with bone-chilling anxiety during what I’d already considered the most haunting song of the show. Seeing him carried by the rotating stage and physically reaching for Eliza, just out of his grasp, was emotionally devastating in a way I’d never felt listening in my car.

I went into the play already having my favorite Hamilton songs, and knowing which live renditions I was most excited for. The real surprise of the live show for me was “It’s Quiet Uptown”, a song I usually skip over in my Hamilton jam sessions. I’ve always appreciated that it’s a beautifully written and performed song, but a couple things made the live experience much more impactful. One of the only differences between the live show and soundtrack is that after young Phillip Hamilton dies, live Eliza lets out a guttural scream of pure agony as the stage cuts to black. Not to be dramatic, but it pierced my heart and soul. I felt every ounce of her unfiltered grief and my first thought was, “this is unimaginable”. Of course one of the big riffs of “It’s Quiet Uptown” is “have pity, they are going through the unimaginable”. Having just felt Eliza’s unimaginable pain, that line and the song itself was heartbreaking in an entirely new way. They weren’t just telling me that their pain was unimaginable, I was feeling that unimaginable pain along with them.

The real accomplishment of Hamilton is bridging the historical divide between past and present. Lin Manual Miranda cut through linguistic and social barriers and presented the unvarnished heart of our nation’s story in a fresh medium that’s accessible and relatable. It may have taken the real Alexander Hamilton hundreds of years to claim the credit and respect he deserved, but I suspect the entire creative force behind Hamilton won’t have to wait that long.